Skip to content
THE SECRET LIVES OF ROCKSTARS
Elfpunk
Leap/Shine

THE SECRET LIVES OF ROCKSTA 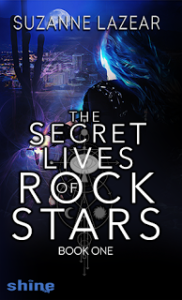 Eighteen-year-old Bitsy Butler has never quite fit in, not with the dragons who raised her, the druid who took her in, or even with the non-human members of the cirque noir punk band she thinks of as family. Her chance to prove she can make it on her own comes with her band’s first big solo tour. It’s all going according to plan when an angel walks into a bar and demands help with his demon problem.

If she doesn’t step up, a magical war will break out, threatening Arizona and all those who call it home. With the help of a human, a sexy dragon, and the members of her band, Bitsy must stop an angry mob of chaos demons before the band leaves for their next tour stop.

It’s nice to be needed, but Bitsy has no idea how to defeat the demons and she just might get herself killed trying. But then, at least one problem would be solved…

Join Bitsy in the second installment of her attempts to stop a magical war threatening Arizona and all those who call it home. With the help of a human, a sexy dragon, and the members of her band, Bitsy must stop an angry mob of chaos demons before the band leaves for their next tour stop.

THE AETHER CHRONICLES (YA Fairytale Steampunk) 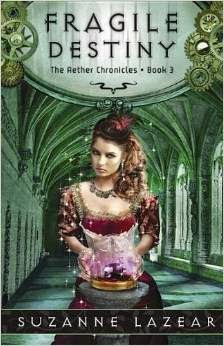 You can buy it at your favorite bookstore or online at Amazon, Indie Bound, The Book Depository, and Barnes and Noble.

Be careful what you wish for…

In an alternate version of 1901 Los Angeles sixteen-year-old Noli Braddock’s hoyden ways land her in an abusive reform school far from home. On mid-summer’s eve she wishes to be anyplace but that dreadful school. A mysterious man from the Realm of Faerie brings her to the Otherworld, only to reveal that she must be sacrificed to restore his dying world.  Her best friend, V, who has secrets of his own, appears to help Noli escape and return to the mortal realm.  If they are successful, Noli will live, but if she does  the entire Otherworld civilization will perish.

“A delicious mix of alternate history, Steampunk, fantastical adventure and
blushing romance; what on Earth (or the Otherworld) is there not to love?” –
Leanna Renee Hieber, award winning, bestselling author of Darker Still: A Novel of
Magic Most Foul

“Guys. Guys. This book? You need it in your life.” – Julie, Bloggers [Heart] Books

“Never bargain with a Fairie queen. It’s the lesson Noli and her friend V learn
the hard way in Suzanne Lazear’s debut novel, Innocent Darkness. A beautifully
depicted glimpse into an alternate world where faery trees grant wishes but
love is the strongest magic of all.” — Jeanne Stein, author, The Anna Strong
Chronicles

Available at your favorite bookstore or Barnes and Noble, Indie-Bound, the Book Depository, or Amazon.

In the Faerie realm, Noli Braddock’s relationship with her best friend V has grown into something more. But V’s mother, Faerie Queen Tiana, has ruled that they are forbidden to see each other. Returning to the mortal realm, Noli joins the crew of her brother’s air-pirate ship, the Vixen’s Revenge. There she discovers that her brother has hired the scallywag Faerie huntsman, Kevighn Silver. While serving as shipmates, Kevighn and Noli learn that the Earth Court King plans to find a forbidden artifact–one that will bring destruction to everyone Noli loves.

“…her imagination soars as high as her airship, and it will have readers hooked.” — Kirkus

“Did I ever love a book til now? CHARMED VENGEANCE bewitched me with its lush fairy-steampunk world. I simply could not stop reading this wonderful story. Suzanne Lazear has the Spark!”– Nancy Holder, New York Times Bestselling Author, The Wicked Saga
FRAGILE DESTINY
Book 3: The Aether Chronicles
ISBN-13: 978-0738739861
Noli and her true love V fear the worst if the Staff of Eris—a potent Otherworld relic—falls into the wrong hands. Broken into pieces and hidden in the mortal realm long ago, the staff bestows vast powers on whoever possesses it. Ciarán, the dark king, is trying to rebuild the staff, intending to use it to install a new queen. In a desperate effort to keep the Otherworld from falling into darkness, Noli and V plot the daring theft of a jewel Ciarán needs to complete the staff. But Ciarán is not so easily defeated. Through his devious machinations, he has set a plan in motion for a final showdown that will decide who rules the Otherworld once and for all.

Available wherever books are sold or from your favorite online retailer such as Amazon or Barnes and Noble.

In this anthology, 20 authors explore the dark and hidden meanings behind some of the most beloved Mother Goose nursery rhymes through short story retellings. The dark twists on classic tales range from exploring whether Jack truly fell or if Jill pushed him instead to why Humpty Dumpty, fragile and alone, sat atop so high of a wall.